The 2013 Sculpey III as compared to the older Sculpey III of 2009 is very hard to condition on many colors, half of my display shelves are hard clay. Customer and children that are buying them in return had to exchange for other clay.

I have been retailing promoting and selling Sculpey clay in Singapore since 2000, and found that the Sculpey III had a reasonable quality but brittle after baking.

I also conducted many test and experiments on all polymer clays.

Sculpey III is a very popular clay with the children it is soft and easy to use without too much kneading. With the new formulation, the clay is much stronger, it's easy-to-use and stays soft until you bake it. Once cured, Sculpey III bakes hard and takes on a matte, bisque-type finish. With 44 vibrant colors, Sculpey III is perfect for figurines, home decor and seasonal items. Fun and friendly modeling medium, bakes hard with a smooth matt finish in an ordinary home oven. Its softness can be rolled cut and extruded through the Sculpey Clay Gun when adding Sculpey clay softener. It is not that strong in compare to Premo Sculpey. Sculpey III is available in 2-ounce packages and select colors are available in one pound and 8 oz. bars. Colors available in one pounds bars are White, Black, Beige, Emerald and Red Hot Red. Sculpey III 8-ounce bars are available in White, Translucent, Black, Hazelnut and Red Hot Red. The 30-Color Sampler is one of our best sellers! A wonderful gift, this economical pack is a great way to experiment with the Sculpey III color family. The sampler includes thirty 1-ounce bars from the Classic, Bright, Natural, Pearl and Pastel color ranges.

The basic character of the clay as above, should be consistent and eventually, the company Polyform should improved the formula, after all we are paying more for Sculpey III than BakeShop, since it is popular, it should be stronger and less brittle. Using Sculpey III since the beginning of 2000 found them to be disappointing at my children's workshops and events, they are sad over brittle, broken project made from Sculpey III. After years of experiencing the clay, I've improved the formula for my students by adding Sculpey Premo, so that it is easier to condition, easy to knead and stronger for them play with their clay project.
I can understand that the clay is still brittle, but the new clay is now unfriendly and difficult to condition it won't be a happy clay toy for kids. Testing the 2013 Sculpey III, I experiencing great difficulty in conditioning the polymer clay, what about the children who are using them.
In compare to other polymer clay for children and young student, Fimo soft and Fimo effects is more stronger, flexible than Sculpey III, although it is a little difficult to condition it is consistent the same hardness since 1997, it is easier to condition than Sculpey III, Filani polymer clay is a new member to the market, it is very strong and good. BakeShop is soft and easier to use, cheaper than Sculpey III and is very popular with my young students stronger than Sculpey III, unfortunately only 12 colors, next is Dukit it is flexible and strong and easy to use the clay.

Here are the test result, 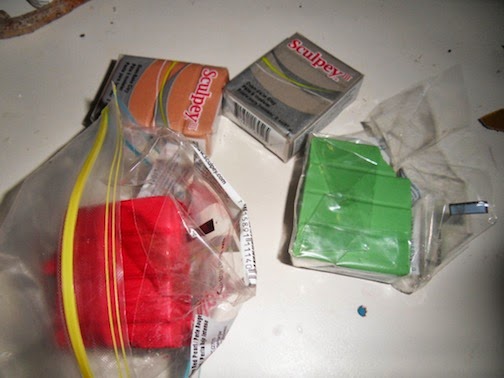 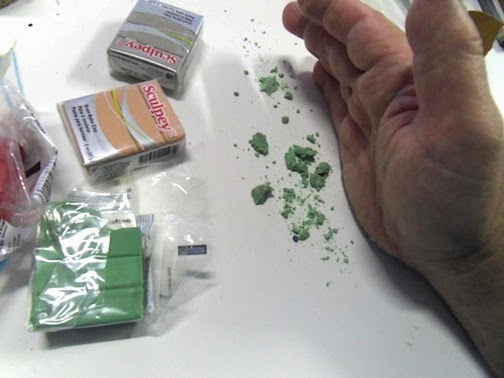 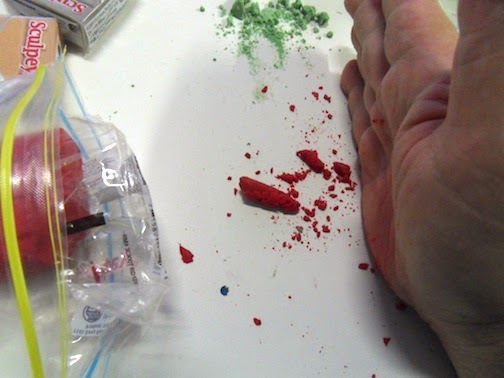 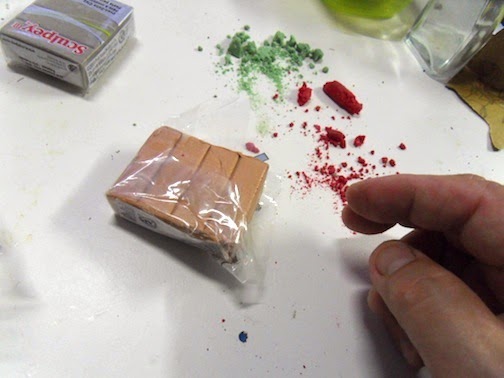 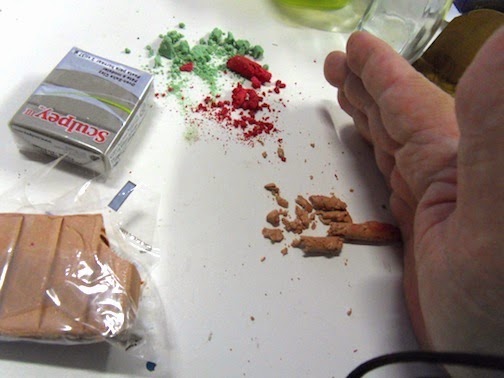 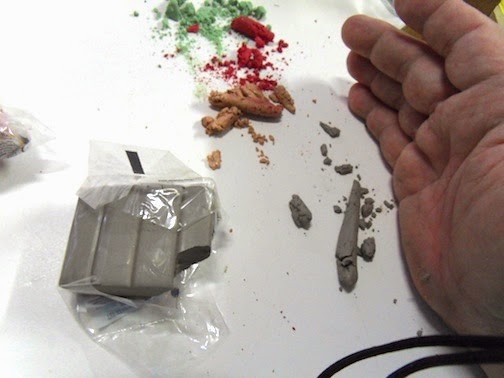 Below are samples of the old and new Super Sculpey III 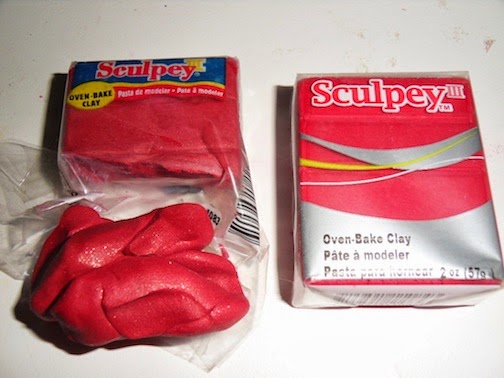 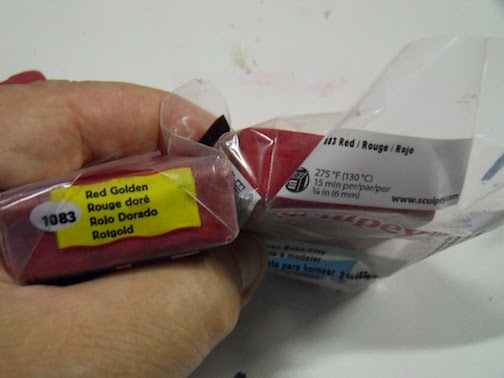 In conclusion, after the comparison and condition tests between the old (2009) and the new Sculpey III (2013), The new SIII is dry, hard and crumby, it is difficult to retail a unfriendly products which is not consistent in quality and become so hard, that even the adult can't even soften the new clay. My unhappy customers and students have to return the hard product and exchanged for other clay. In comparison, I do not face the same problem, like Fimo, Filani, Premo put under the same display area.
As the clay, is not friendly, I will not retail Sculpey III, right after launching the test page.

I had talked to Wayne of Global Sales for Polyform Products Company, he will look into the hard clay problem and try and resolve the situation. I will submit further, more codes on those hard batch on display. Mean time I've suspended retailing the Sculpey III on my website.
He told me that those new batch that I had kept on the display, " looks like it has been stored or exposed to heat in some way; that is why it is crumbly. Somehow it was damaged."
I had not experienced such serious problem with Sculpey III since 2002, except the returned of the Eraser clay, unfortunately, the clay were so hard that my customer had to rejected and returned the goods for the refunds.
Talking about heat, I have keep my older Sculpey III, newer Fimo clay new and the oldest Fimo (25 years) in the same room they are not affected and can still be condition as the clay are not dry. Premo, Cernit, Filani, Fimo Soft, Fimo Effects, Fimo Classic, BakeShop, Ultralight, Mold Maker and others that are not badly affected, and it is still in good condition.
I hope to resolve the issue with Wayne and hopefully the Scupey III formulation can be change to a more durable and friendly clay for children :)

Here is the link to the conditioning of the old clay Fimo Clay, http://www.garieinternational.com.sg/clay/shop/softening.htm

Just received a parcel of polymer clay products from Polyform Products Company Inc. Global Sales Department, these are replacement for bad batches of hard Sculpey III clay, new tools and samples of Soluffle Polymer clay, books. It's a good relationship that I have been building since 2001 and the responsiblity towards their company's products, is their piority towards their distributors and customers....Thank You Polyform for replacing the faulty batch.
Although, they have replaced a batch of Sculpey III, the existing problem is not resolved and I'm still disappointed. 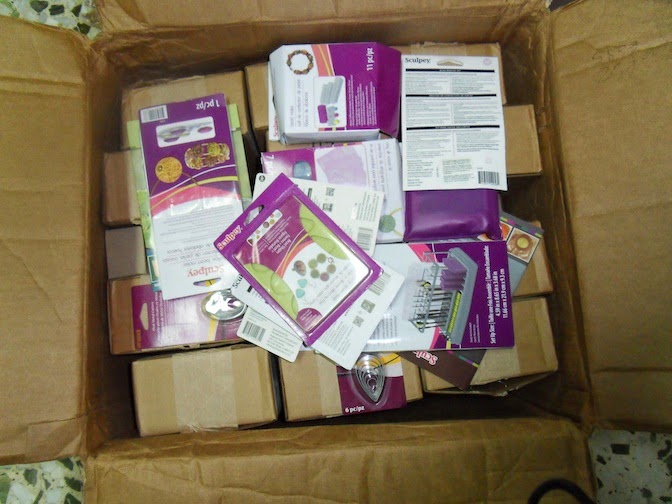 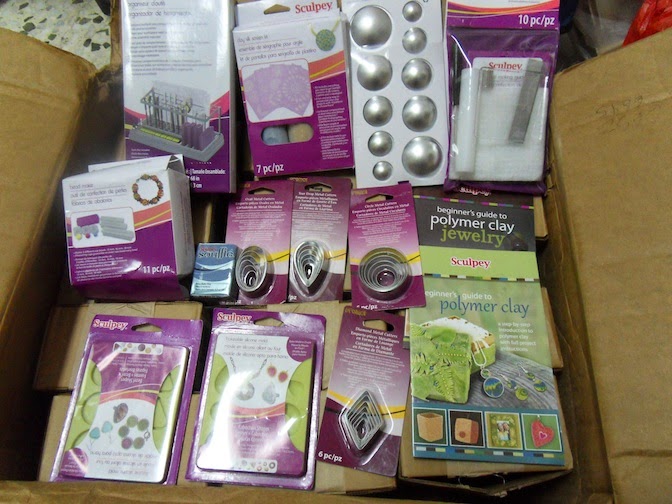 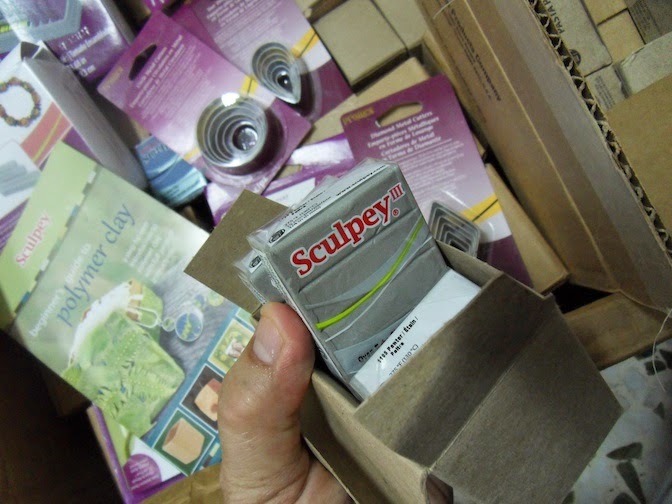 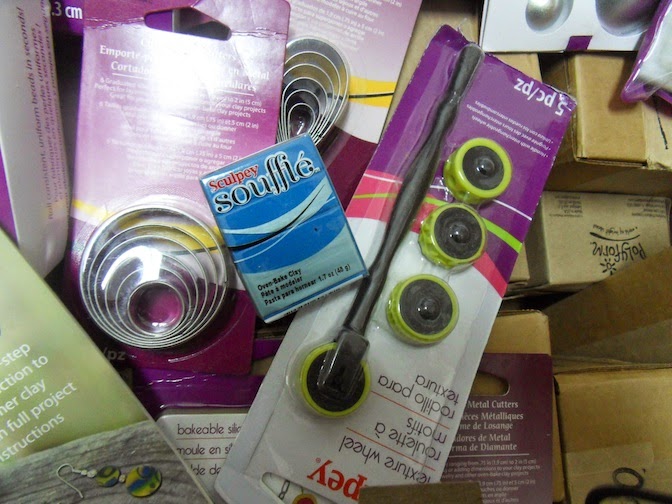